Technolog has a great model — Robogear «Hunter» buggy. It is cheap and has an interesting design.

As a base for 40k vehicles conversions, it’s a good option and the results can be found on the Internet.

But her scale is not very convenient 1/48. Also, I want to modify its design by adding my own elements. Such as cabin armor elements, weapon mounts and 28mm scale driving place,
I do not cast in resin. I make 3d models and then print it (I don’t have my 3d printer though). Therefore, I had to first copy the buggy model to use it as a base template for creating new compatible parts.
And what I did is:

Yes, it looks like original model. It’s almost same size. But I slightly altered the design (could not resist). And so it turned out an independent model.
It is worth saying that this is not the first attempt at modeling the buggy. Before, on the Tehnolog forum, I was offered to create an alternative to their  buggy (missile launcher vehicle). However, my ideas didn’t look very nice and practical. Perhaps, starting from the original design will turn out better.
File can be downloaded here: https://www.thingiverse.com/thing:2314616

I did not do this project for a while (for years?), then decided to try to alter the front end: 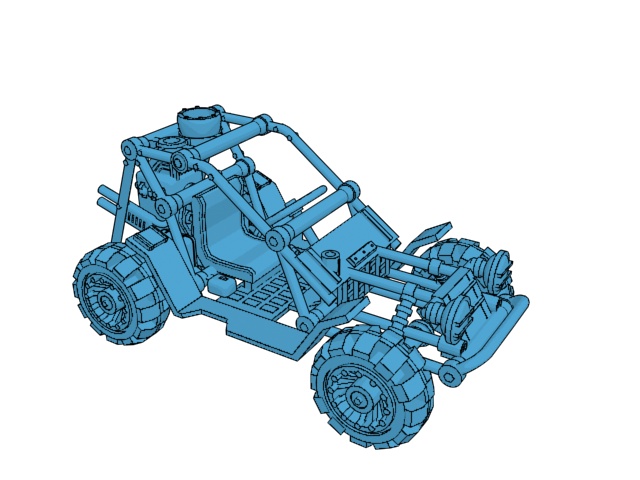 And result was much better. But. It’s longer and capable to carry same weapons (I want bigger weapons). Also, I wanted to add second crew member — a gunner. And there is no place for him.
Looks nice, anyway:

What’s next?
I still have to complete modelling original Tehnolog design for creating conversion parts. And I want to finish designing heavier version with missile launcher. Maybe, there also will be orcish style designs and Elysian Tauros style design. Above all, there are ideas for creating a vehicle constructor with uniform chassis patterns  to make it all compatible each other.